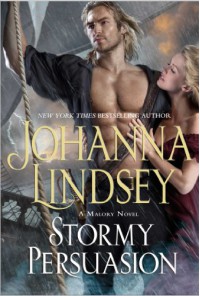 This book is number 11 in the Malory-Anderson family book series. I have read none of the previous books. I’m sure that the author anticipated people just like me would jump in and read this book without the benefit of reading the previous books. She spent a huge amount of time and pages reconstructing the history prior to this book. The problem with that is that she tried to tell the story of 10 books while telling a new story. I was as lost as a goose on all of the history among brothers and families. She explained the family history at the beginning and continued to bring up the family history throughout the book. It was overkill. There is just no way to catch a reader up on 10 books worth of stories. The plot to this book really had nothing to do with the family history. She could have alluded to a few things and gone on to tell this story. However, by choosing to place so much emphasis on history her storyline was lost in this book. I could not even become interested in the characters.

Jacqueline and Judith are cousins and best friends. The two girls are inseparable and hatch a plan to have their coming out together in America and England. The voyage to England becomes interesting when Judith meets a man that she believed was a ghost. She is attracted to him and the feeling is mutual. Judy and Nathan have great chemistry. They share their bodies and their souls with each other. Judy’s failure to believe in Nathan drives a wedge between them. However, when Jacqueline goes missing Nathan steps in to save the day. Nathan and Judy get their happily ever after.

As I stated earlier the plot to this book left a lot to be desired. It was very simplistic and lacked the basic elements that draw the reader into the story. I know Johanna Lindsey is a great writer. I have read many of her earlier novels, but this one is not her best effort. I struggled to finish it, and I can’t say that I would be willing to read book 12 of this series. This one wasn’t terrible, but it was a far cry from her previous titles.