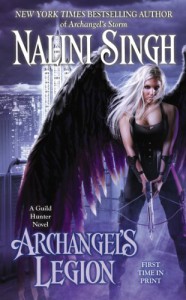 On the brink of war, Raphael and his immortal with a mortal heart, Elena, have quite a battle ahead of them. While facing threats from unseen enemies, archangels increasing in power, and remnants of the past intent on destroying them, the pair’s love, commitment and strengths are tested. As the story unfolds, alliances are formed, secrets are revealed, and the destruction of all that Raphael and Elena hold dear is imminent. Can they protect their territory and still survive unscathed if at all?

It seems like I’ve waited for this book forever. It was so great to revisit all the characters I love. We learn more about Illium, Aodhan, and Nassir and get a look into the archangels Elijah, Astaad and Titus. Thankfully Michaela isn’t in the book much, but it seems another has come to vie for Raphael’s affections. We also get a few scenes between Elena and her youngest sister, Eve and a more in-depth look into Elena and Jeffrey’s estrangement.

What I really loved most about this book was the continuing growth in Raphael and Elena’s relationship. While Raphael is still getting used to a consort who is technically a baby in the world of immortals, Elena continues to prove herself worthy with her strength and her unending stubbornness. I loved watching Elena step into her role as a consort in performing the duties of the title, becoming Raphael’s voice in his absence. The love between these two seemed to have evolved into a power all in itself.

I could not put this book down. It is the BEST book I’ve read all year! A wild, adrenaline rush of mystery, intrigue and danger! Nalini writes her ass off! Her worlds are meticulously planned and so descriptive. Her characters are multi-dimensional with such realness to them. One of the best authors I’ve ever read. If you haven’t had a chance to check her out, you should!