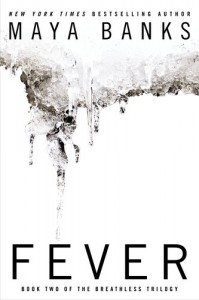 I was a little disappointed in this entry into the Breathless series. Jace was a character that I really liked in Rush. He was super supportive of his sister, even after he discovered she was having a relationship with his much older best friend. The way he handled the situation made me like him more and I was really looking forward to his book. Unfortunately, Jace turned into Gabe in this book and it was a bit of a turnoff.

Jace lays eyes on Bethany across the ballroom as she worked Gabe and Mia's engagement party. He immediately feels something for Bethany and wants to keep her for himself, despite always sharing women with this best friend, Ash. But Bethany isn't like any of the women Jace has been with and the sudden possessive streak Jace feels threatens their relationship from the very beginning. Can they both learn to trust in themselves and each other to make this work?

As I said above, Jace turned into someone else in this book. He was broody, possessive, quick to jump to conclusions and someone I jut didn't like at all. He would show an extremely sweet and caring side when it came to Bethany, but his other side tended to take any good feelings I had towards him away.

Bethany was a little of a doormat, because she not only let Jace walk all over her with his bad attitude, she also let Jack (her foster brother) all in the name of giving back to him because of all he did for her. That got a little aggravating at times, especially when she kept claiming she wanted to change, stand on her own and make a new life for herself.

My other issue with the book was the age difference between Bethany and Jace. It was exactly the same as Gabe and Mia. Really? Two 38 year old best friends would both find young 23 year old women to fall in love with? It seemed a bit unrealistic and became a bone of contention for me, because it made me wonder why there couldn't have been an older woman for Jace and if Ash was going to miraculously find himself with a 23 year old as well.
Tweet