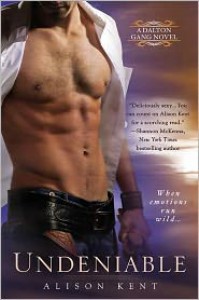 Dax Campbell is one naughty cowboy! Phew! I needed a tall, cool drink after this one!

Sixteen years ago, Dax Campbell left Crow Hill, Texas and the family expectations that threatened to drown him. But when he discovers he and his two best friends have been left the ranch of a couple he thought of more as parents than his own, he comes back hoping he can turn the ranch around and steer clear of his parents.

Arwen Poole has a huge crush on Dax in high school. She figures now that he's back in town, she work him out of her system with some hot, no-commitment sex. But things aren't as straight forward or as easy as she thought it was going to be with Dax. Instead she finds herself falling for Dax, hoping he'll stay, and breaking one of her cardinal rules.

Dax and Arwen don't have an easy road. Both of them have been shaped by their alcoholic parents and the events of their youth. They're jaded and convinced they don't know how to do relationships or love. They both use sex as a release with each other any time conversations or events start going down a path they don't want. It's hard to read, at times, but demonstrates just how broken they both seem to be when it comes to dealing with their emotions and others.

I'll admit, Dax and Arwen were both a bit on the selfish side...especially when it came to their family. But Dax was the worst. Dax blows into town, hiding from his parents but doesn't reach out to his sister even though he's thinking about her. When their father was in the hospital, he knew his sister was upset, but still didn't do anything to comfort her, just thought about himself. And when Dax decided to leave, Arwen's feelings came secondary to what Dax wanted. That selfishness made it hard to like Dax at times, but his remorse and confusion about his feelings ended up being his saving grace time and again.

This was an incredibly hot book, considering Arwen and Dax wielded sex like a weapon, but it was also emotionally gritty. It wasn't the perfect romance, because neither Arwen or Dax was emotionally capable of having that kind of relationship. But they grew as characters and they were trying to build something out of everything that was broken around them...which endeared them to me.