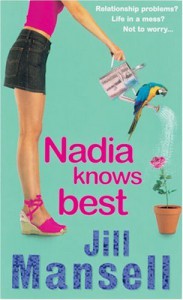 First off, I enjoyed this book immensely. This story is about more than Nadia and her romantic issues, it’s about her whole family and told from the varying viewpoints of her and her two sisters Claire and Tilly. Each character is distinct and the author does an amazing job of describing each sisters’ perspective and story. Tilly is thirteen and desperately trying to find her place in the family and the world at large. Claire is the middle daughter, a beautiful artist, whose attention seeking behavior is spiraling out of control. Nadia is the oldest sister and the main character in this family story.

As the story opens Nadia becomes stranded at a small inn overnight during a snowstorm. During this adventure she meets mysterious Jay, but Nadia already has a boyfriend so the attraction she feels for Jay can go nowhere. Nadia’s boyfriend quickly dumps her and Jay re-enters her life but he’s not the same happy, flirty person she met during the snowstorm. As the book progresses the reader, along with Nadia, has to figure out whether Jay is insincere or not. Add to that the lost boyfriend returning, a romance for Nadia’s dad, a grandmother with long buried secrets and two sisters who are facing their own challenges and Nadia Knows Best is a pretty packed story.

This a great weekend read, it’s not too heavy and the characters are really engaging. At times I was frustrated with the pace because I wanted Nadia to make a decision but enjoyed reading her journey. I enjoyed the budding friendship between her and Jay and the complexity of feelings she had for the wayward Laurie. I enjoyed most of the secondary characters, except Claire, her self-centered actions and lack of consideration for anyone but herself was grating and one-dimensional. Overall, this was a satisfying read.