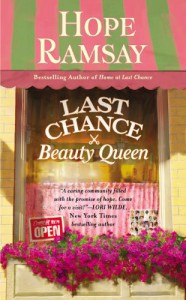 Caroline (Rocky) Rhodes has one goal: help Senator Warren she works with make his way to Washington and earn herself a place in his office. Her road to that goal is helping Senator and Lord Woolham get a factory built in South Carolina. The problem is, the land Lord Woolham is hoping ot build his factory on happens to be owned by Caroline's father.

Caroline ends up taking Lord Woolham back to Last Chance so he can get a feel for the town and hope to sway the townspeople that his factory is a good thing for the town. Problem is, when Caroline goes back home, she becomes Rocky and has to deal with all the local town gossip and the skeletons in her closet.

Hugh deBacy, Lord Woolham came to South Carolina after discovering his now-deceased partner had bought land in this little town for their factory, with the exception of one small parcel. But when he enlisted the help of Senator Warren he didn't expect to find the quaint little town reminding him of his village in England. He also didn't expect to be drawn to Caroline or that there was something much more going on with the land around the parcel he's trying to buy.

I have to say, I loved Hugh and Caroline. Hugh was wonderfully English but also very down to earth and was able to fit in with the residents of Last Chance, when he should have stuck out like a sore thumb. He was also able to see through the facade Caroline put up. He was able to get her to accept who she is. Caroline, who thought she was sophisticated enough for someone like Hugh, was also able to help Hugh accept that he was so much more than the duty his grandfather had engrained in him.

The residents of Last Chance only enhanced this story. All the characters were able to pull a readers from wherever you were reading into the town of Last Chance and feel as if you were right there with them.

A charming book that was very entertaining and has me looking for other Hope Ramsay books to read.
Tweet