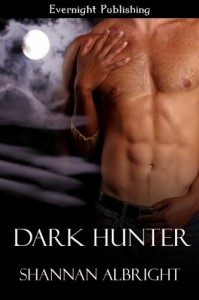 I didn’t realize there were two previous books in the Dark Breed Enforcer series and I found myself a little lost in reading this book. I had to write down a lot of the story in order to keep my interest in it.

Mari owns a bar in the older part of Las Vegas, Nevada catering to human and paranormal creatures alike. She is reminiscing about a hostage situation and torture session in her bar the previous month and is pining for her vampire maker, and lover who died two thousand years ago.

The next thing you know, her maker, Navar, is standing in her bar telling her that his body was replaced with another body, which was beheaded, and Navar was taken into the service of a sidhe queen as a tracker. His reason for not contacting Mari over the years is that he had to take a blood oath not to contact anyone from his past to protect the secretive race of paranormal beings’ existence.

After Mari debates the pros and cons of giving Navar a chance to gain her trust, they end up in a steamy sexual reunion of bodies and souls. While trying to prove to Mari he is here to stay, he takes a job as a bouncer in her bar and spends the rest of the time in her bed having mind-blowing sex. The honeymoon is over when a bar employee is murdered during an attack from the Preservation Society, a human hate group targeting all paranormal breeds.

Mari enlists the help of the enforcers, headed by Marcus Valarian, to investigate and bring these responsible to justice. There is an unexpected twist at the end of the story of who the enemy really is. Justice was served and Mari and Navar were able to put the past behind them and move on happily together.

I had a difficult time getting through the story because I wasn’t able to connect with Mari and Navar. I couldn’t relate to their love or the relationship between them. Because I couldn’t connect with the main characters, I couldn’t really get into the story either. If I had read it in the series order, I think I would have been more invested in the story. It was well-written and very descriptive, but it just wasn’t a story that I enjoyed.