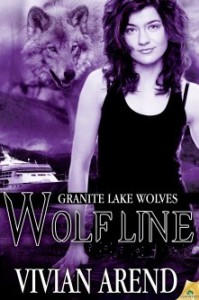 "Running away from the big brothers of his current lover, Jared finds himself jumping aboard a cruise ship to avoid getting caught. Never one to pass up a good prank, he pretends to be his pack member and joins the ship crew as a maintenance worker. What begins as a prank ends with him being stuck on the ship for the duration of the cruise impersonating someone else, fighting his attraction to his mate and trying to stop a jewel thief intent on framing him for the thefts.

As the fifth book in the series, you would expect characters or storylines to start getting redundant. That’s not the case here. With his almost childish sense of humor, Jared is unlike the other Granite Pack heroes we have been introduced to thus far. His quirkiness was perfectly complimented by the seriousness of Keri, his mate. Whereas Jared doesn’t seem to take anything serious, Keri takes her job on the cruise ship as troubleshooter and general hand holder to her best friend and cruise director, Tessa, very serious.

The only complaint I’ve got is regarding the thefts. That part of the storyline seemed forced, as if it was tossed it to give the story a twist. However well intentioned it fell a little flat. It seemed more like a bunch of random events that were tossed in rather than part of the actual storyline. That aside, Keri and Jared’s behavior towards the other, trying to avoid each other while still keeping a close eye, was entertaining. It was very reminiscent of high school and first love. Being a very visual person, I couldn’t help myself from chuckling more than once picturing two grown adults acting like children every time the person they’re interested in comes in the room.

It was great revisiting the Granite Pack and I can’t wait to see what the future brings for the other pack members.