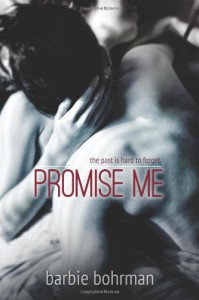 PROMISE ME, for me, had the potential to be a fabulous read.  Going to your high school reunion, hoping to see the one person that made all the crap you went through fall by the wayside, was one I was totally on board with.  But Sabrina, our heroine, did this story in.

Sabrina hasn't been that lucky in love.  Her high school boyfriend, one she'd been with for three years, cheated on her right after she gave him her virginity with her best friend.  She was devastated, but one person rode to her rescue, local bad boy Tyler Anderson.  He made her promise to not let what happened with her ex beat her down.  She was to leave their little hometown and make something of herself.  It's a promise she's kept for ten years.  So when she gets an invitation to her high school reunion, her best friend (not the one from high school) convinces her she needs to go.  She reluctantly agrees but secretly hopes that Tyler is going to be there.  When her wishes come true, Sabrina finds herself quickly in a relationship with the man of her dreams.  But when he breaks her trust, she finds herself back in the same situation she was in high school and not sure how to get out of it.

I can understand why Sabrina would have hard time, say in college, with trusting guys after what her ex and best friend did to her.  But seeing as she found herself with a new best friend, I found it hard to understand just why she hadn't opened up to a man.  It almost seemed like she was punishing herself for what happened.  She'd have little flings with guys, but nothing of substance.  Even with Tyler, it seemed like she held back info or her feelings on things as a way to sabotage what they had.  Sure, Tyler screwed up....big time.  But Sabrina wasn't 100% truthful about things on her end either, giving that seed of doubt that could crush what they had.

Tyler wassn't a saint and he held quite a big piece of the blame puzzle in the story, but it didn't really seem like he was fighting for Sabrina.  He made one attempt and when Sabrina said stop, he did.  I mean, for me, if the man really loves me and needs me to know he's sorry for what he did and needs me back...FIGHT DAMMIT!  You didn't wear her down and get her to understand how much you need her and she you.  She did it herself.

There was a lot of potential here, but I needed Sabrina to be a little less buried in her past hurts and stand up for what she wants.  Fight for it.  Fight for the man you love or leave him and stop obsessing about him.